4 Fantastic Ruins in the UK You Must Visit Before Brexit

Brexit is coming! At this point, the possible consequences of the UK leaving the EU to seem dire at best and apocalyptic at worst. Reach ‘Children of Men’ stuff, that. So while the UK hasn’t ruined itself yet, make sure to visit some of the best historical British ruins!

Let’s start with something from the relatively recent past. St. Peter’s seminary was built in 1966 and closed in 1980. Architects Isi Metzstein and Andy MacMillan were behind the vision that incorporated an old Victorian house into a complex of new, modern buildings. Unfortunately, maintenance was hard and water kept getting in.

This, and the falling priest enrollment rates, resulted in St. Peter’s closure. From then on, the building was caught in limbo, with the diocese being unable to sell it, the government being unwilling to pay for its preservation (it’s a protected architectural marvel, after all) and the art collective that was supposed to turn it into an arts center closing down. Best see it while it still stands! Also, be aware that Glasgow International Airport can only show an OTP of 82%, with flight disruptions to be expected in nearly 1 of 5 flights.

No list of ruins would be complete without a castle. And Wardour Castle is probably the fanciest – and the most intact – of the lot. Built-in 1390, it was inspired by the hexagonal castle craze sweeping France at that time.

Originally constructed by Lovell nobles, it was confiscated when they supported the wrong (read: losing) side in the War of the Roses. Arundells bought it out, which lead to the Wardour Castle participating in the English Civil War. Arundells even had the pleasure of sieging their own home! However, the castle was partially destroyed in the fighting, and when the New Wardour Castle was built, the old one was left as a romantic ruin. I’m sure it was not made dour by the war. 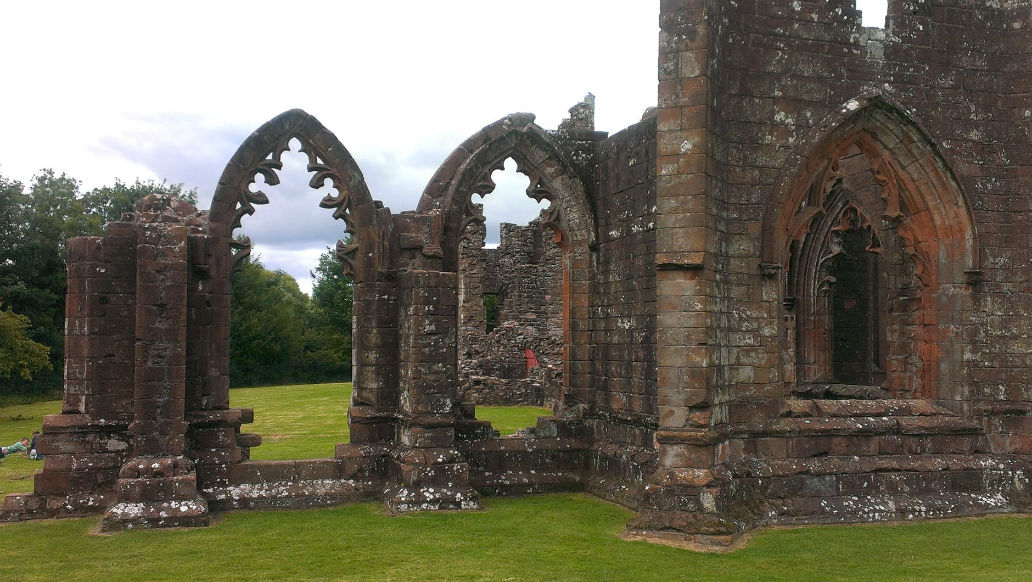 Can’t leave you lot be without putting a priory on the list, right? So why not visit the Bromholm Priory in Norfolk? Established in 1113, it was a base for Cluniac (heh) monks, and even a site of pilgrimage, as it was considered to have held a piece of the True Cross.

It did not escape the Dissolution of the Monasteries in 1356 (Henry VIII wasn’t a cool guy like that), which increased the amount of tourist-attracting ruins dramatically. Back in World War II, part of the Bromholm Priory ruin was made into a pillbox, in case the Nazis tried to land… in Norfolk. A more realistic proposition would be to take a KLM flight from Amsterdam to Norwich Airport. Even if you encounter flight disruptions, it will still be a much smoother trip than the Germans would have experienced.

Now, this is a CASTLE. You probably drew something similar to Bodiam Castle when you were little. It looks like the spitting image, the dictionary illustration of one. However, its square shape and large moat fail to hide the fact that it doesn’t have a keep (the central structure of any castle where the living quarters were), having built all the chambers and what not into the walls.

Clearly, the castle was built as much to impress as to oppress. Originally constructed to defend the country from the French, it was during the English Civil War where it fell… after being sold to pay fines, dismantled and left as a picturesque ruin. Partially restored in the 19th century, it still looks amazing.

Of course, this is but a small sampling of ruins dotting the English countryside, and you should hurry to visit them. Flight disruptions might still happen, especially with Brexit breathing down our necks. However, worry not and claim delayed (or cancelled) flight compensation via Skycop! You’ll likely to be paid for the indignity you experienced and, with compensation of up to €600, become rich enough to afford your own piece of England come April!

Here’s How Brexit Will Affect Your Travel Plans