5 UNESCO Sites In Portugal You Simply Must Visit

UNESCO is really cool about marking beautiful ancient sites for preservation. One could almost say they inadvertently create a travel atlas for tourists. So let’s explore this premise by taking a look at the best UNESCO sites Portugal can offer.

The University of Coimbra only gained World Heritage status in 2013, but it’s extremely old. It was founded by King Dinis, and it’s the first university in Portugal. It was initially established in Alta da Coimbra (Upper Coimbra), were you can see such amazing architectural sights as the Baroque Joanine Library, which has its own colony of bats to protect the books from insects!

And while the university offers many a beauty in Alta, you can also go downtown, where the university spilled over after it outgrew its initial area. The University took over many disused convents near or along Rua de Sofia. And since Coimbra has been inhabited since at least the Roman times, you can see many sights besides! It’s a veritable bonanza of locations for any tourist visiting Portugal!

The full name of this Portuguese UNESCO site is “Cultural Landscape of Sintra” – just rolls off the tongue, doesn’t it? One of the most astounding things about the place is how in the 19th century, Ferdinand II took a ruined monastery and turned it into a castle that melded Gothic, Moorish and Renaissance styles.

Together with all the parks and dwellings that it influenced, the Pena Palace makes up the aforementioned “Cultural Landscape.” However, that’s not all you can see there – so have a look at the Sintra National Palace or the Castle of the Moors! Bet you never thought of Moors in the context of Portugal! 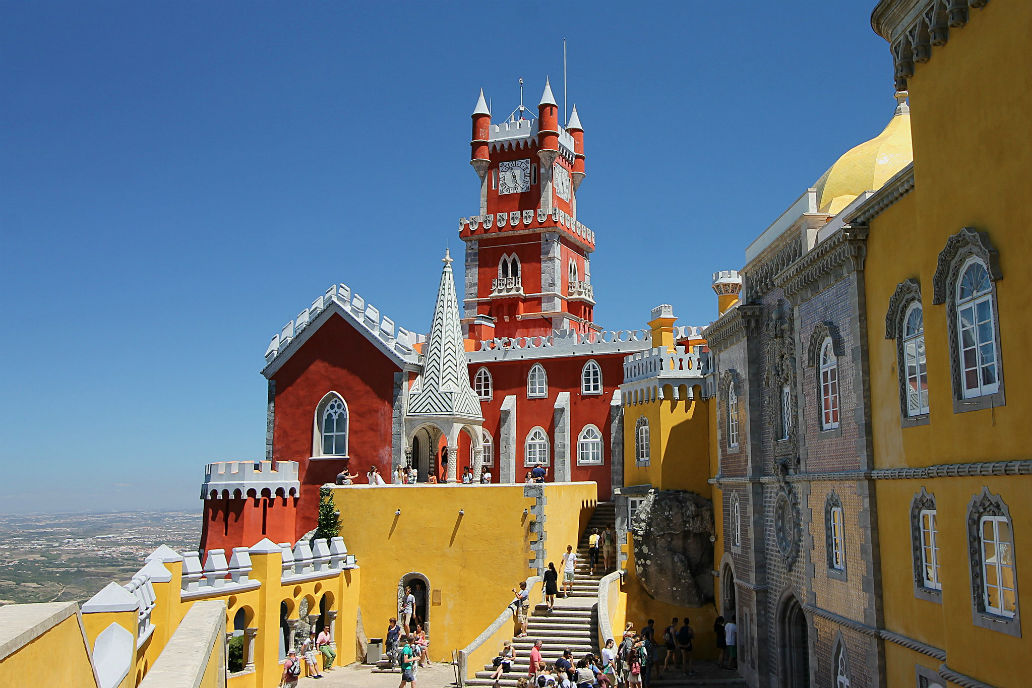 Photo by Nicolas Vollmer. Distributed under CC BY 2.0

Batalha Monastery is beautiful. It’s a golden Gothic building resplendent with carved stone motifs and stained glass windows. Inside, you can find the Founders’ Chapel with the tombs of King João I and Phillipa of Lancaster. Why is the king buried there? Because he promised to build a monastery to thank the Virgin Mary if the Portuguese won the Battle of Aljubarrota against the Castilians. You can probably get what happened next.

15 architects, 7 kings and a century later, the work stopped as it was getting out of hand. That’s how the Unfinished Chapels get their name. They finished the lower part but didn’t get to the ceilings. The place also houses the Tomb of the Unknown Soldier, and there’s a small military museum nearby.

Alcobaça proudly hosts a 12th-century Cistercian monastery. It also has ties to a tragic historical love story of Prince Pedro and Inês de Castro. They were very much in love, but court politics (and Pedro’s marriage) got in the way. His father, King Afonso, didn’t allow them to get married even after Pedro’s wife died.

They wed in secret… but then the king had Inês killed. Pedro, of course, killed the assassins and commissioned his and Inês’ tombs to face each other. Oh, and the place has other neat stuff, like a massive kitchen chimney or the Room of the Kings, which displays the changing royal fashions over the centuries.

1. Garrison Border Town of Elvas and its Fortifications

Yep, that’s the full name for the UNESCO site, because this Portuguese fortification system is a wonder by itself. It’s called the largest bulwarked (walled) dry-ditch (dry moat) system in the world. Elvas was part of the fortifications of the Spanish-Portuguese frontier and played an important part in the Portuguese Restoration War.

Today, you can visit two grand forts (and three fortlets), which are majestic examples of the star fort design. The site also includes the historical center of Elvas (not the only town center in Portugal to attract UNESCO’s eye) as well as an aqueduct. And of course, since the location is quite old, you can see other cool stuff, too.

But if you end up going to Portugal, be aware that flight disruptions are a thing that can happen to any flight (or, in case of Vueling, 1 in 7 flights). If that happens, you should claim flight compensation via Skycop. That way, your flight delay or cancelled flight can turn into up to €600 in compensation!