8 Pinkest Places in the World You Can Ever Visit

Pink is an interesting choice of color for a building, but stranger things have happened. And many spots have chosen it over other, more muted options.  To learn more about the world by visiting these 8 pink places!

This stylish restaurant is a recent newcomer to the New York restaurant scene. However, it can boast an all-pink design that can’t be beaten. Though not an expert, I’ll deem the interiors to be inspired by Streamline Moderne style, which is awesome for that minimalist retro look. Pietro Nolita looks like a diner blast from the past, but it serves healthy Italian food that’s really up to today’s standards!

Lake Hiller in ‘Straya is actually the world’s only source of Pepto Bismol. No, I jest, it’s just a salty lake full of microorganisms. That’s right, just like the rest of Australia is hostile to human life, the lake is as salty as the Dead Sea and only the teeny, tiny algae and bacteria live there, producing the trademark pink color.

Muralla Roja is an apartment complex in Spain. This “pink wall” was designed by architect Ricardo Bofill and built-in 1973. The exteriors are mostly pink, but the inner walls of the compound are blue. You can still stay at it today – and people on the internet give it stellar reviews! 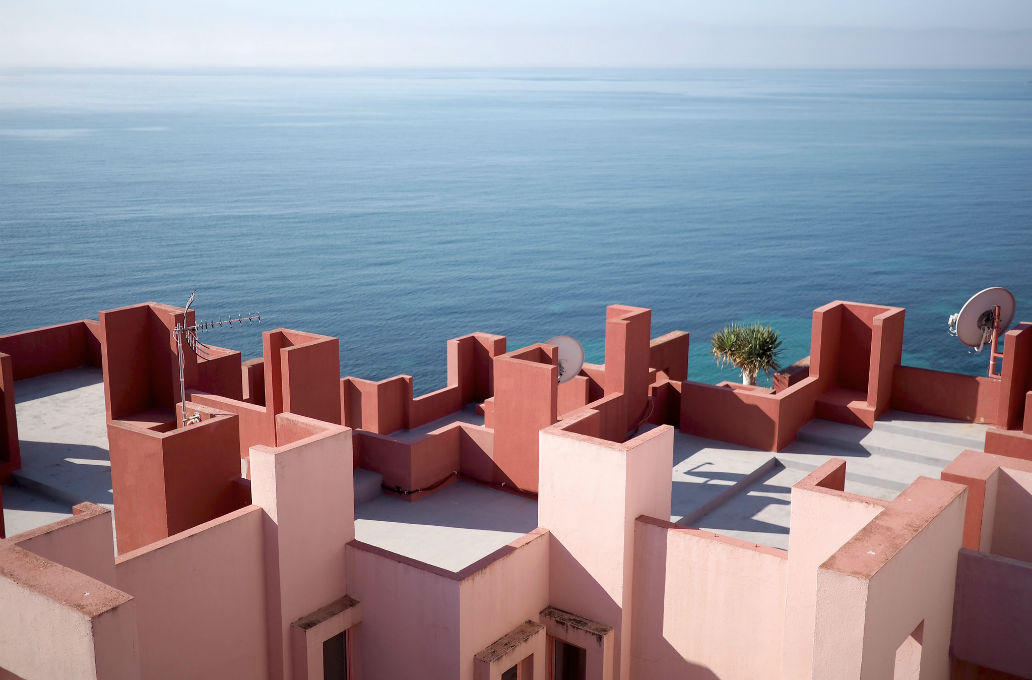 Food-related objects dominate the pink scene for some reason. Maybe we’re all reminded of macaroons or something? Well, Sketch offers more than that. Opened in December 2002, it’s the brainchild of French master chef Pierre Gagnaire and restaurateur Mourad Mazouz. Sketch offers a variety of meals and a website where you can stack cupcakes on tiered plates until they fall over.

I’d say that Japan during the sakura blooming season counts for a pink place. But for more specific – and more vibrant – experience, visit the Hitsujiyama Park. It is famous for its Shibazakura blossoms. Also known as moss phlox (and not an actual moss), the plant transforms the ground into a bright pink carpet that contrasts with the white of Mt. Fuji that stands in the distance. The phlox blooms from late April to early May, so this is one of the places where a disrupted flight could make you miss all of the pinks.

Lake Reba, however, is pink all year round! Located in Senegal, this lake is colored by a bacteria which produces the pinkish pigment to absorb sunlight (bacterias don’t have many hobbies). Apparently, the colors are best during the dry season (from November to June), which makes this lake a good destination for people from northern climes who are tired of winter.

Haha, Pan y Pasteles is actually in Alcaldá de Henares near Madrid, and not in the city itself! Located in a 150-year-old building, this bakery keeps it pink with 12,000 pink wooden sticks that cover its ceilings. And I assume they make a few pink pastries, too!

Who would have thought you’d find pink stuff in craggy of’ Scotland? Well, if you have a castle, you can paint it whatever color you please. Anyone who objects will be faced by a very literal question of “you and who’s the army?” Craigievar Castle was built in 1626, restored in the 19th century and received its pink-ish, historically accurate harling (“a rough-cast wall finish consisting of lime and aggregate, notable for its rough texture”) in 2007.

Granted, February 27th is but a single day. Therefore, it can be easily ruined by a disrupted flight… or a canceled flight… or even overbooking! That’s why you shouldn’t give in to the bullying from the airlines. Fight for your rights by claiming compensation via Skycop! With up to €600 in compensation being on the line, you can’t afford to!