It’s the Women in Aviation Week, ya’ll! Today (and several other days), we celebrate the ladies that took to the sky or built things that did the same. Due to patriarchy being what it is, you probably don’t know much about these daring aviatrixes. So read this article and be amazed!

Sometimes called the “Speed Queen,” Jacqueline Cochran had more speed, distance, or altitude records at the time of her death than any other pilot in aviation history. She was the first female pilot to break the sound barrier in 1953, but her achievements had begun even earlier. Having only learned to fly in the early 1930s (and have done so in three weeks), she won the transcontinental Bendix race before the outbreak of World War II.

During the war, Jacqueline first ferried planes to England, being the first woman to cross the Atlantic in a bomber (which, scientists agree, is much cooler than doing it any other way). She also laid the groundwork for the formation of Women Airforce Service Pilots in an effort to free male pilots for air combat roles. She also knew Chuck Yeager, the male counterpart to Jacqueline Cochran.

Bessie Coleman was the first woman of African-American AND Native American descent (that’s two different categories) to hold a pilot license in the USA. Born into a family of sharecroppers, she faced poverty, segregation and racism-borne lack of flight opportunities (what with being Black, Native and female).

However, Bessie’s hatred for the bounds of gravity could not be overcome and she saved up money to get a flying license in France. She did it on a Nieuport 82 E.2 trainer, a plane that the military had considered being trash way back in 1914 when aviation was considered to be an elaborate form of suicide. To advance the case of female and minority fliers, she became an exhibition pilot and was quite popular at that. However, Bessie died in 1926 while testing a new plane. 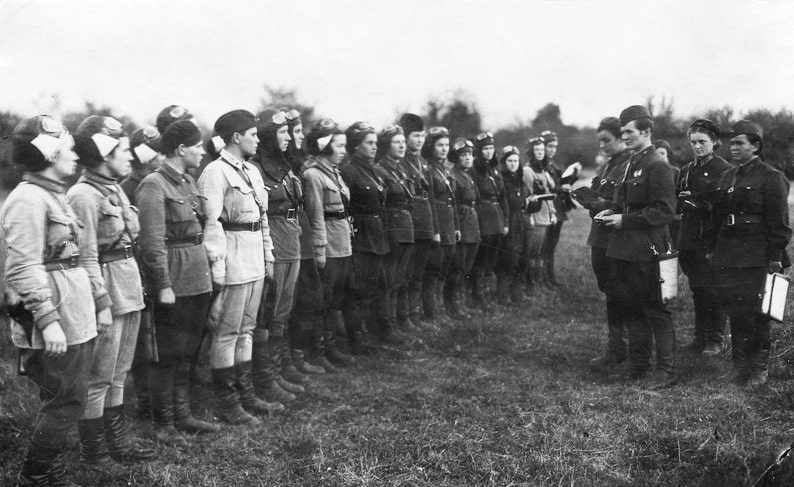 Naturally, once you get a female aviator, you’re not that far off from a female combat aviator. So while Jacqueline Cochran was asking the males of the US military establishment to maybe allow women into non-combat flying roles, Stalin was authorizing the creation of three all-female air force units (granted, this was done out of desperation, and not of any high-minded ideals that Uncle Joe might have held).

One of them, the 588th Night Bomber Regiment was equipped with Polikarpov Po-2 wood-and-canvas biplanes. Great training aircraft, they could be used as night bombers, that didn’t mean they were top of the line planes in World War II. That’s why ladies got creative: they used the plane’s ability to fly slower than German fighters to mess with interceptors. During their night raids, they would shut down engines before reaching the target, gliding to their destination and then dropping their bombs. Since the Nazis could only hear the sound of wind sweeping over the fuselage, they started calling them the “Night Witches.” All in all, 32 women died while serving the unit, 33 earned Hero of the Soviet Union awards, one became the only female to get the newly-minted Order of Suvorov, and all of them were badasses.

Like many early Norwegian aviatrixes, Turi Widerøe was the daughter of a wealthy couple. However, instead of flaunting her wealth, she flouted the surly bonds of Earth to become an aviator. She got her flight certificate in 1962 and her commercial pilot license in 1967. Before that, she had started working at her father’s company as a floatplane pilot.

Knowing many experienced floatplane pilots (and marrying one), Turi eventually moved deeper into civil aviation. The first female pilot employed by SAS (the airline, not the special forces unit), she flew Convair Metropolitans before moving onto DC-9s. SAS used her status as a great publicity boost, even taking her to the US, a country that had basically obliterated the concept of female pilots by the 1970s. I wonder what she’d think of flight delays!

If you know one female pilot, it’s probably Amelia Earhart. She has done many aviation deeds that easily catches the public eye: she was the first woman to cross the Atlantic by airplane (in 1928, though it wasn’t a bomber) and to fly across the ocean solo (in 1932, still not in a bomber).

Not content to just be “the first woman to fly x”, she became the first person to fly single from Honolulu to California in 1935. Sadly, she perished in 1937 when she and copilot Frederick J. Noonan tried to fly around the world.

Women did not stop lusting for God-like power to smite people from the sky after World War II, you know. Marianne Mjelde Knutsen is currently Norway’s only fighter pilot, flying the F-16 (the famous Viper). She had considered learning to fly rescue helicopters, but people at her flight school convinced her that no, learning to fly a jet isn’t that hard.

Considering that “the helicopter symbolize(s) the victory of ingenuity over common sense,” they might not have been wrong. Marianne learned to fly the F-16, becoming the second female fighter jet pilot in Norway ever… before she was grounded by a 6 cm tumor in her brain. Not the one to back off from a fight, she boom-and-zoomed the tumor, and is now back in the air, presumably flipping off Swedish Grippen pilots as she goes.

So as you see, female aviators have been overcoming major obstacles as far as planes existed. Your flight disruptions might seem minor in comparison, but you shouldn’t forget them. Every flight delay, cancelled flight or overbooking stands the chance of being converted into a flight compensation. Claim it via Skycop!

The Underestimated Contributions of Women in Aviation History