Bradley Button was flying on a Singapore Airlines flight from Melbourne to New Zealand when he found a tooth in his rice dish. “I threw my guts up,” he told the press. “For the rest of the flight I was not well, just the idea of having someone else’s body part in my food is not nice.” Now, let’s learn about other weird and disgusting things that people have found in their in-flight meals!

We’re neither cyborgs nor hedgehogs, so we don’t really need to have metal needles in our food supply. Yet that doesn’t guarantee that these iron supplements won’t make their way into your in-flight meal. Nearly a decade ago, passengers on a Delta flight from Amsterdam munched on turkey sandwiches – and got a mouthful of sewing needles for their troubles. One passenger was treated with antiviral medication for it.

And in 2015, a Dragonair passenger found that his rice meal contained a bent 2,5 cm chirurgical needles. He discovered it when he had some trouble swallowing it. This case made Dragonair employ more stringent food controls. Which begs the question: if a flight is cancelled or diverted due to some mass food-related disaster, can you still claim compensation? Probably yes!

Iguana-on-a-stick is a Fallout staple. However, our airlines are not operating under the conditions of a nuclear apocalypse, so we usually expect a lot less lizard in our meals. That happened on an Air India flight from Delhi to London when a small gecko-like creature was discovered stowing away next to a meal.

See? Geckos being small is another proof that we’re not in Fallout yet. Call me when your scaly food contaminant starts breathing fire. 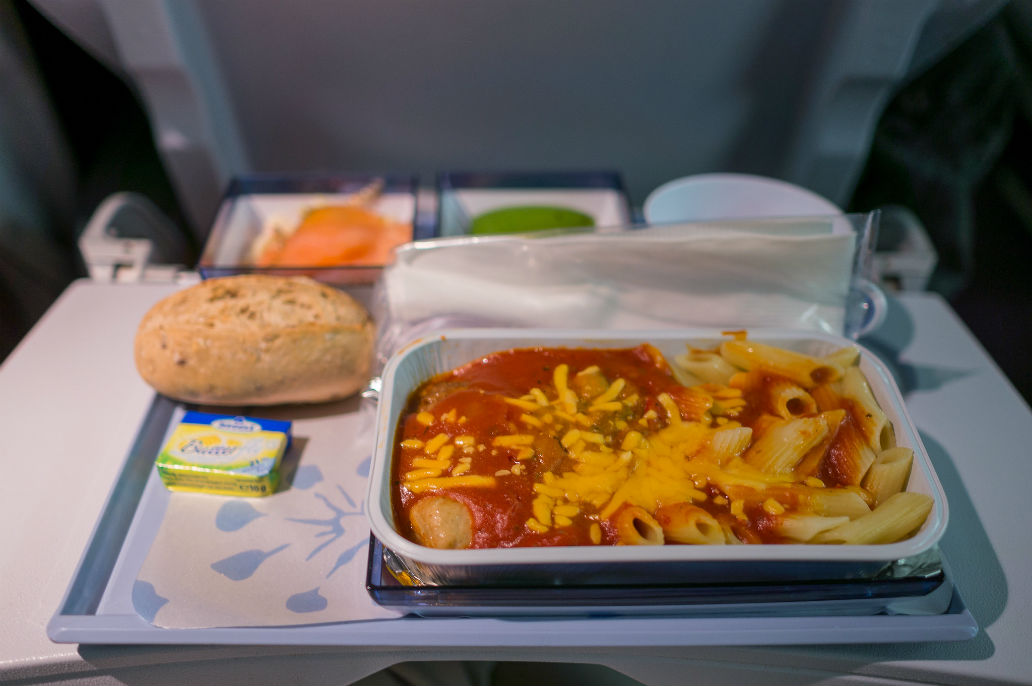 Jerry Springer never asked “what’s the deal with cholera in the airline food,” but only because it’s that uncommon. But in 1992, 75 passengers on Aerolinas Argentinas got sick after eating tainted salad. One man even died. Eventually, the poisoning was traced back to the shrimp, which turned out to be teeming with choera. This one case 17 years ago is just the justification I need to continue my one-man crusade against shrimp!

On the other hand, American Airlines encountered trouble in 2011 when Othon Cortez’ family sued them for his death. They claim that his food was contaminated by the Clostridium perfringens bacteria (one of the common contaminants in the US – yet still lacking a normal name). Interesting fact: Clostridium perfringens is immune to formaldehyde, so it gives mortuary workers no end of grief.

Cholera and shrimp are almost edible on a very theoretical level. Do you know what isn’t? Glass. But some poor fliers have for sure encountered it. Back in 2012, American Airlines were serving a kickass meal to the rich passengers: a salad, an appetizer, a choice of entree and a dessert. A travelling couple chose ice cream sundae. But their first bit was surprisingly (and suspiciously) crunchy: there were glass shards in the ice cream. The flight attendant offered them another scoop of ice cream, which they declined. So let this serve as an example that flying first class can bring you opulence, comfort, enough leg space, service like unto a Pharaoh, but not save you from finding foreign objects in your food.

As further proof that we live in the worst cyberpunk dystopia, we still haven’t started eating food bars made out of suspicious materials (“IT’S CHOCOLATE! IT’S PEOPLE! IT’S BOTH!™ 85% Recycled Material”) or bugs. However, you can live that experience if you have the money for airline food: not only does it taste (and feel) like Soylent Green would be a good alternative, but bogs are quite frequent visitors, too.

FDA has, at once point, found LSG Sky Chef facilities to be “infested with ants crawling over discarded food, flies both dead and alive—and roaches all over.” A seven-year-old boy once found a cockroach on his Air India meal and asked his mom what it was after picking it out of his food. And a Quantas flier once found maggots in her trail-mix snack served aboard the flight. She did it only after noticing that the nuts tasted weird (like the future). That’s one way to introduce people to the protein-rich super-food of the future, I guess.

Now, these are all quite nasty as far as flight disturbances go. But what if you faced a delayed, cancelled or overbooked flight? In that case, I humbly suggest you claim flight compensation of Skycop. With the chance to win up to €600 in compensation, you will be able to buy about two and a half sandwiches on your next flight! Maybe you can even buy one without needles in it!