Usually, it’s expected that you will pay for all goods and services, no matter how minor they are. That’s especially true for budget airlines. However, we at Skycop operate under the “no win, no fee” strategy. How does that work exactly?

Since Skycop isn’t an NGO or just a bundle of repurposed mIRC bots, it needs to make money to function and to pay me (so I could keep my cats fed). This is where our 30% remuneration comes in – that’s the proportion of your flight compensation that you pay us if we win.

Notice the “if” there.

When you encounter a disruption – a delayed flight, a cancelled flight, an overbooked flight – you have the option of claiming flight compensation. However, Regulation (EC) 261/2004 is an extensive document that not only outlines your rights, but also the guidelines for compensation. That means that there are certain exceptions where the airline does not end up owing you money.

On a related note, here’s a simple process used to check whether your flight is eligible for compensation.

Step 1: Is your flight actually delayed/cancelled/overbooked?

The law considers a flight delay to be worthy of compensation only if the plane arrived (landed) three or more hours late. That means that planes that leave late can sometimes arrive under the limit.

For cancellations, the flight had to be cancelled without a warning 14 or more days prior.

As for overbooking, you deserve compensation if you were denied boarding because the airline sold more tickets than the flight had seats. 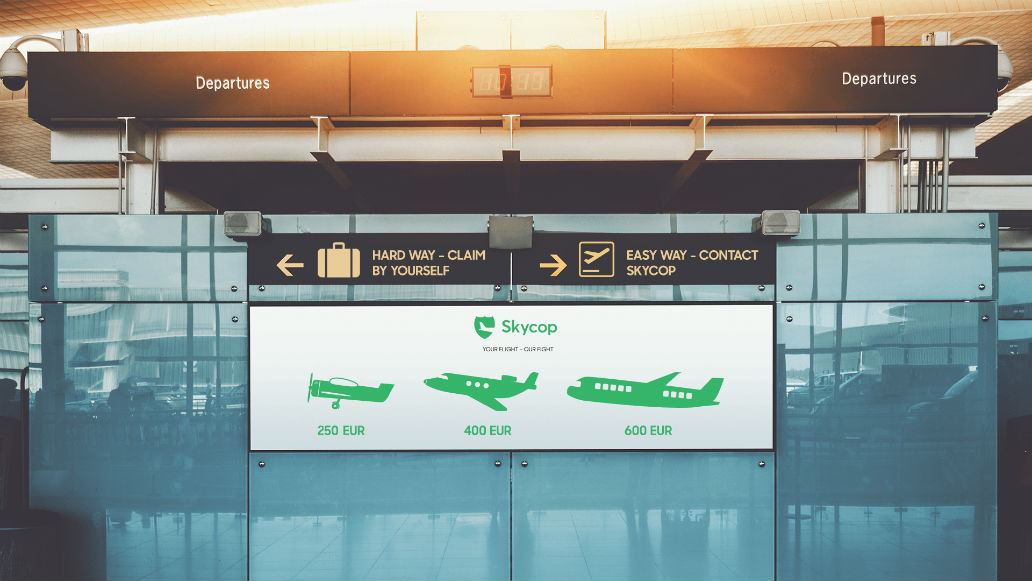 Step 2: Is your flight operating within the bounds of the regulation?

Step 3: Was it the airline’s fault?

The Regulation deems your claim worthy of flight compensation if the flight disruption was the airline’s fault. While there’s not much wiggle room when it comes to overbooked flights, Regulation (EC) 261/2004 list several exceptions for delayed flights and cancelled flights.

That means that some claims won’t be compensated. And this is where the “no win, no fee” part comes in. It means that you, as our client, will pay us absolutely nothing if the claim is unsuccessful. The expenses of having our flight disruption claim experts go over your case will be borne by us at Skycop. We didn’t win your flight compensation? Our bad, we won’t charge you!

This is what makes claims flight compensation via Skycop such a winning proposition for you, the flyer. You’re not risking anything by trying. Just claim and see what happens. Even if we need to take the claim to the court, we will bear the costs if it doesn’t come to fruition (and flight compensation). And even if we do get, the additional expenses to you will not amount to more than an additional 30% off your claim.

You see, there’s really no risk in claiming via Skycop. Once we start working on your behalf, we’ll handle everything – even the communication with the airline, which might prove intimidating to some. But you needn’t be scared. If you experienced a delayed flight, a cancelled flight or flight overbooking, claim compensation with Skycop and see what we can do together.

European Passenger Rights Are Valid in Canada: Claim a Compensation for a Disrupted Flight

Flight cancelled? Now You Have Time to Claim Compensation!

6 Things To Do When Your Flight Is Cancelled