Today is Unicorn Day! However, since the Act Of Unicorn Farm Ban of 1926, there haven’t been any places to see unicorns these days. But there are still plenty of shiny spots around the world to see. So here are the most colorful places in the world you should visit on (the next) National Unicorn Day!

The name translates to “Marble Caves,” but the place is also called “The Marble Cathedral” It’s truly a natural marvel on the shores of General Carerra Lake, the second-largest freshwater lake in South America. It’s a bit of a bother to reach the caves, but they’re totally worth it.

And now, for something decidedly unnatural. Capitola is a seaside town in California and it’s famous for its colorful Venetian Court that lies next to the beach. The colors of the houses are quite stunning indeed!

Was the Venetian Court not colorful enough for you? Then skip over the Pacific Ocean and go see the Zhangye National Geopark in China. The tectonic movements that made the Himalayas are responsible for the sharp, layered sandstone rocks of the park. They’re more blinged-out than any mountain has the right to be!

Back in the 70s, people of Chefchaouen decided to paint the town blue to attract tourists. They succeeded, wildly so. The place is chock-full of tourists when the season comes or during Catholic celebrations that attract many a Spaniard. Also, it’s quite near to Kef Toghobeit Cave, one of the deepest caves in Africa! 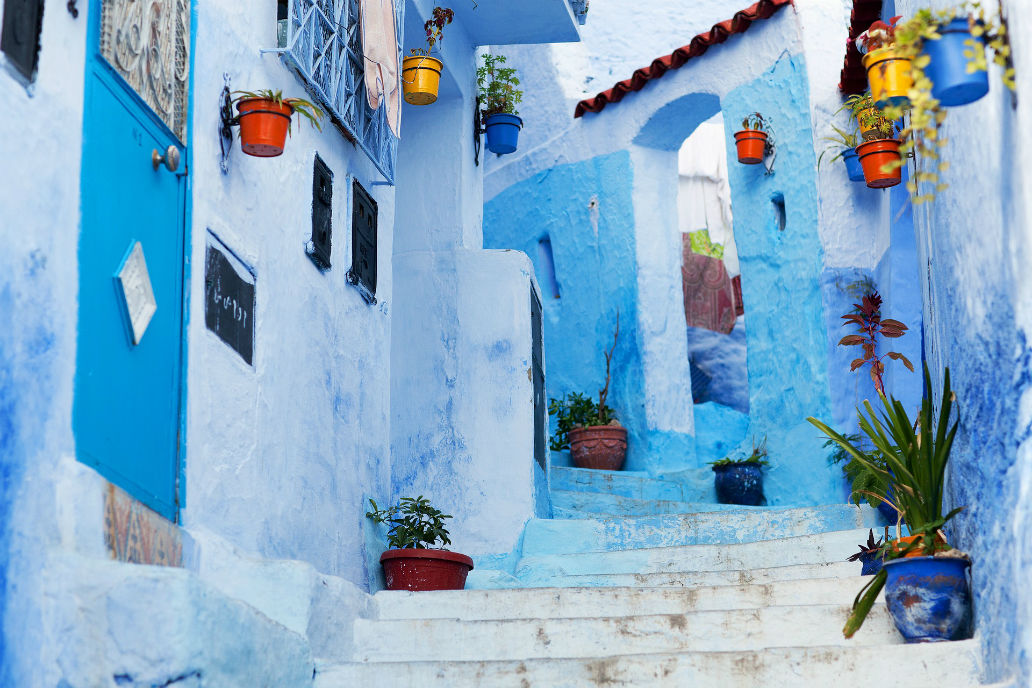 But how about some natural-grown color? That’s why you’d want to go to Provence in France. The fields of lavender you can see there will simply assault you with the color purple. It’s probably the only place in the world where Barney the Dinosaur has an evolutionary advantage. And since you’ll be flying to see it inside the EU, you’ll have the advantage when it comes to claiming flight disruption compensation.

Ye ancient humans have been swimming in these travertine limestone pools since Romans ruled the Earth. However, these terraced stone pools are a UNESCO World Heritage site these days. It’s still well worth a visit!

This is an industrial waste site where the tubby custard farm used to stand. No, I’m just kidding, it’s Lake Hillier, the pinkest lake in the world. Featured in every similar listicle about colorful geography, there are many theories as to what gives the lake it’s pink hue.

Reasonably afraid of Australia and all the antediluvian monstrosities that live there? Lake Natron in Tanzania which offers an even more intense experience than Lake Hillier, but in Africa! Too bad it’s not recommended to swim in it, though, the pH levels in the lake are extremely unsafe.

So there you have it, a few color choices for unicorn day. However, it may be a little difficult to visit them on the day itself if flight delays and cancellations (or even overbooking) get in the way. But if that happens, claim compensation vis Skycop! We may not be endorsed by Princess Unikitty or any real unicorns, but we’ll help you claim up to €600 in-flight compensation!