9 Books to Read on a Plane

It’s always a good opportunity to remind people to read books – and not because Marie Kondo is coming to take them away. Now, we suspect that a good part of you are travelers, so here are some books you could read on the flight – even on a long one!

9. A Guide to the Birds of East Africa – Nicholas Drayson

With a name befitting a Wes Anderson movie, you know this good has to be good. The main character of this book is Mr. Malik. Rose Mbikwa is a widow who understands his grief over the loss of his wife and helps him deal with it. Malik feels like this is going in a romantic direction, but alas! The Nairobi Hunt Club Ball is coming and another suitor wants to invite Rose. The men decide to settle this like gentlemen: with competitive bird spotting. You can already see this book is going places!

After the Soviet War in Afghanistan, said graveyard of the empires was left to fend for itself. This was a fruitful time for a civil war, once which the Taliban eventually won. The Khaled Hosseini’s 2003 book details the life and hardship of a young Afghan boy in a country that’s increasingly disintegrating. With the Taliban seemingly poised to win the American War in Afghanistan (what with the US starting negotiations with them), we might be in for a spiritual sequel in a decade or two.

Want something very light (literally and metaphorically) to read on your flight? Then get the book that inspired a terrible movie. It tells the history of a zombie apocalypse via a journalist interviewing the survivors from all around the world. It’s a fun read, even if some of the battle scenes are a bit grating.

Malcolm Gladwell is one of the few well-known sociologists and The Tipping Point is the book that made his name. Published in 2002, it argues that ideas spread like viruses, starting from a small initial outbreak and using many vectors to eventually change the world. Or, on a smaller scale, to become an annoying meme on the internet. It’s probably the easiest sociology-related reading you can do on a plane.

This book, which is totally not a Terry Pratchett title focusing on dwarves, takes you back to the past. The Little Men takes place in Hollywood, 1953. Penny, an unsuccessful actress, rents a bungalow. Soon, she realizes why her rent is so reasonable: the previous owner, a bookseller, was beset by illusions and killed himself in the house. Soon, Penny starts losing her grip on reality, too. Is it a didactic story about the importance of keeping your house free from toxic mold? An introductory module for Bibliomancer players of Unknown Armies? Read and find out! 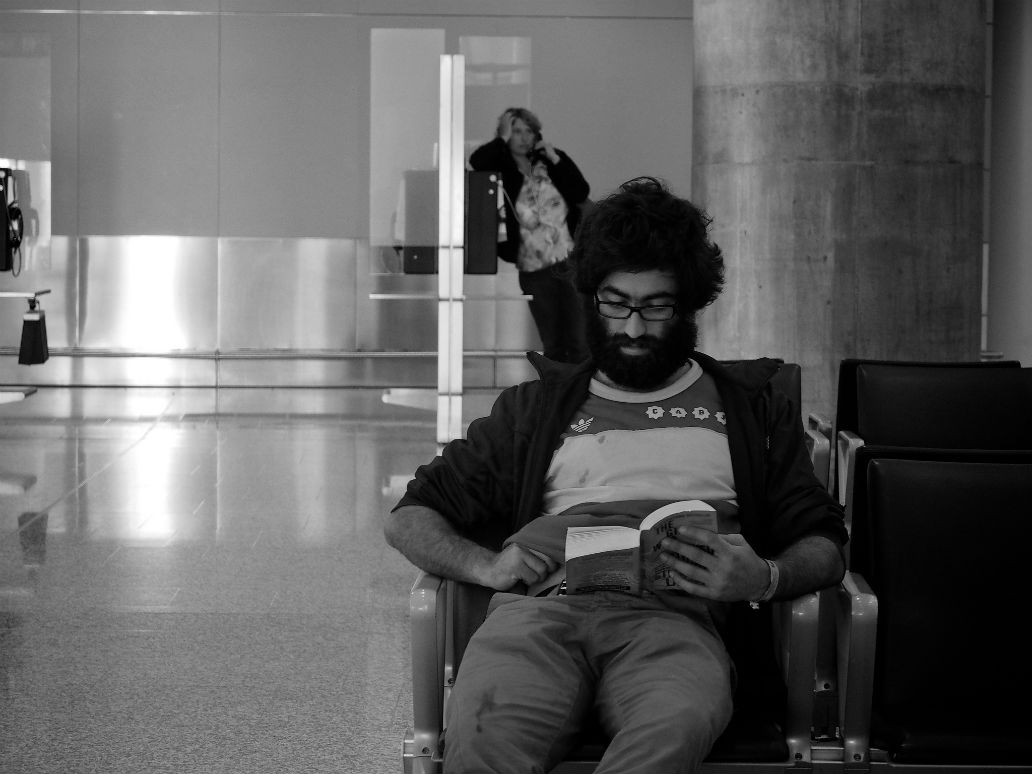 Photo by Terry Ozon. Distributed under CC BY 2.0

Read the book that brought the Russell Crowe movie of the same name! The first book of the Aubrey/Maturin series is a bit long, but it’s fine for a longer flight (or if you’re experiencing a cancelled flight). Follow the adventures of a Royal Navy captain during the Napoleonic Wars. Or, if you have a reasonable hatred for the seas, get Bernard Cornwell’s Sharpe’s Rifles to meet the only Sean Bean character to ever survive a series of TV shows.

This is not a book about the Communist Moon invading Earth. However, it’s pretty neat, since Red Moon is kinda like True Blood… but for werewolves! There will be politics, there will be action, and the opening chapter takes place on a flight, putting your own experiences with airborne annoyances into sharp contrast! This is a weighty tome, best suited for a long flight or a terrible case of a delayed flight.

Fully titled Chapo Guide to Revolution: A Manifesto Against Logic, Facts, and Reason, this is a book for those who want a refreshing take on modern politics and world in general. With a title like that, there could be no other way. It’s a light read, all in all (unlike many other manifestos), but it might leave you angry enough to punch a plane window out. Please don’t do that.

Trains are the kings of public transportation. And Train Dreams is one of those kingly books. Starting with an orphan getting a train lift to 1893’s Idaho, the book follows his journey through life. Memorable for its plausibly-folksy language and the stark contrast between civilization and wilderness, it’s an awesome book to read.

And as I have previously mentioned, all of these books will serve you good if you fall prey to delayed flights, cancelled flights of overbooking. Crack open one of these tomes to make the wait at the airport a lot more bearable. However, don’t forget that you might be eligible for flight compensation! Fill out a form on Skycop.com and relax with a good book!

9 Books to Read on a Plane on World Book Day